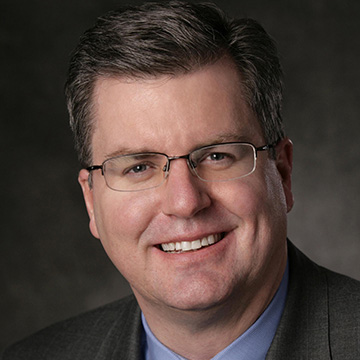 Wedding at the Hospital Days After Surgery

It was Thanksgiving, 2016. Mori Jo Meling was trying to enjoy the celebration with her family, but wasn’t feeling well.

“I was dizzy and was wobbling around,” explains the 46-year-old Rockford, Ill. real estate agent. “The feeling didn’t go away, and by January I couldn’t take it anymore.”

For treatment, Mori Jo went to a walk-in clinic for help. She walked out with a prescription for antibiotics.

Next, Treatment for Vertigo

When the antibiotics did not help, the doctor at the walk-in clinic recommended a physical therapist and getting treatment for vertigo. Mori Jo also went to a chiropractor, hoping that would help speed her healing.

“After I was adjusted by the chiropractor, I felt great,” Mori Jo explains. “But the next week was the worst of my life and I felt miserable. Nothing was making sense.”

Her chiropractor decided to schedule an MRI—and thankfully Mori Jo followed through right away, despite the fact that she was busy trying to get ready for her wedding in Mexico, which was just a few days away.

“The MRI Showed a Spot on My Brain”

“When I met with the chiropractor, he looked concerned,” she says. “The MRI showed a spot on my brain.”

The chiropractor had tried to contact Mori Jo’s neurosurgeon, but he was out of the country and couldn’t be reached. Fortunately, his partner, Richard W. Broderick, M.D., a neurosurgeon for OrthoIllinois, stepped in and answered the phone while in his car driving between hospitals.

When Dr. Broderick saw the MRI, he told Mori Jo to go directly to the Emergency Room at OSF Saint Anthony in Rockford. She did, and after she got there, she texted her finance, Patrick Conkrite, and asked him to meet her there.

Surgery Needed as Soon as Possible

Dr. Broderick met Mori Jo and Patrick at the hospital, and explained that the situation was critical. Mori Jo had a pea-sized tumor with a lemon-sized cyst compressing her brainstem, and needed surgery as soon as possible—within the next day or two and no later.

Although the operation would require her to be face-down for five hours, Mori Jo’s thoughts were also on her wedding in Mexico, and she realized it would need to be postponed.

Dr. Broderick said he was amazed by Mori Jo’s response.

“Instead of falling to pieces like most people would, she took it in stride and focused on practical matters,” he says. “It was amazing.”

Mori Jo admits that part of her reaction was due to the fact that everything had happened so quickly, and she hadn’t fully processed the gravity of the situation. Still, she decided to focus outward, and poured all her efforts into getting her marriage license from the county court, which she and Patrick would need eventually for their wedding.

“The gal who worked at the county court office, Thalia, remembered me,” explains Mori Jo. “When she found out what happened, she said she would come to my hospital room to swear us in which would allow us to get the license. Wow—I couldn’t believe it.”

“Many hospitals don’t have these capabilities,” he says. “But at OSF, we can take pre-operative scans of the brain, have special navigation equipment and can have MRIs projected on a computer screen while we do surgery. This lets me plan where the incisions are, and know how much bone needs to be removed.”

To perform Mori Jo’s procedure required two separate incisions and two separate bone removals to get to the tumor. The first step was to remove a thumbnail sized piece of bone. In order to perform this highly precise procedure, Dr. Broderick used a computerized intra operative navigation system known as Stealth, which utilizes three cameras. Using the system, he placed a temporary shunt, which is a small tube that allows fluid to drain. Then, a second incision was made and a larger area of bone was removed over the area where the tumor and the cyst were located. This allowed him to drain the cyst, safely remove the tumor and relieve the pressure on her brainstem.

One risk of the surgery was that Mori Jo could become blind. After the procedure, she says the first thing she heard when she woke up was her finance yelling, “Can you see me?” Fortunately, she could.

Over the next few days, Mori Jo says she threw up and had painful “super-sonic” hearing, but she was eventually able to rest and recover, and could walk immediately after the procedure. When Paul Arco, the Community Relations Coordinator from the hospital asked her what she was going to do next, Mori Jo explained that she was going to get married in Mexico, but now she would need to work on revising those plans.

“He said, ‘We can do the wedding here!’” said Mori Jo. “So we did! It was amazing—he planned everything from the ceremony to the flowers. One of the nurse’s at OSF even came in on her day off to the intensive care unit, where I still was, and did my hair and makeup.”

Mori Jo’s Father Walks Her Down the Aisle

With her father on one side, and OSF nurse Christy Russel Burkett on the other, on March 8, 2017—just five days after her surgery—Mori Jo walked down the aisle to meet Patrick. Witnessing the event were not only family but hospital staff including the president of the hospital, doctors and nurses. When they said, “I do,” there wasn’t a dry eye in the house.

“I never gave up hope. The idea of missing my wedding because of being ‘dizzy’ just wasn’t an option,” says Mori Jo. “Even when the MRI came back showing a spot on my brain, I still wasn’t willing to cancel my wedding. I knew deep down inside there was an answer. I just needed to trust Dr. Broderick.”

She also says she was lucky that the access to her care was so convenient.

“This level of skilled health care is right here in my ‘backyard’— I just had to drive down the street. Many people would fly around the world to get the kind of top-level care I received. I have to thank Dr. Broderick for giving me a second chance at life.”