Doctors told Sabrina Veverka’s mom, Norine, Sabrina would never walk, talk, or ride a bike. But Sabrina (and Norine) had different plans. Twenty-two years later she has 89 Special Olympic medals, and even a torn ACL injury couldn’t stop her from competing. 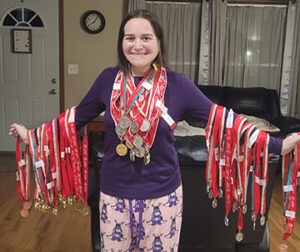 It was during a flag football game in Oct. of 2021 when Sabrina had a major collision with another athlete in which she injured her left leg. She was sore but Sabrina has a very high pain tolerance, so she proceeded to play in a state competition for volleyball just a few days later. When Sabrina’s mom noticed she was limping she decided to take her to OrthoIllinois, where they saw Dr. Van Thiel and his Physician Assistant Stephanie Leverentz.

“We love OrthoIllinois,” said Norine. “Practically my whole family has been treated there for one thing or another.”

Dr. Van Thiel decided to perform an MRI, which revealed multiple issues – a torn ACL and LCL, a tear in the meniscus and a fractured tibia. Both Dr. Van Thiel and Stephanie were astonished that Sabrina was not in more pain and was even able to walk. Sabrina’s injuries were severe, so surgery to repair the ACL was scheduled for Dec. of 2021.

“He is so professional, yet caring,” Norine continues. “He explains everything so well and kept us informed about Sabrina’s progress along the way.”

During that appointment, Norine stressed that Sabrina was part of Team Illinois and was supposed to perform at the Special Olympic USA Games in Orlando in the 400- and 100-meter races and that their goal was to have her participate in that competition in some way, shape, or form.

Sabrina had been nominated for this team because of all the gold medals she had received in the past and it was very important to her to compete. Following her surgery, Dr. Van Thiel put her on a solid therapy plan to help her meet her goals. She worked with her physical therapy “dream team,” Brooke Locum, PTA, Hannah Clark, PTA, Rebecca Nauman, PT, Beck Chase, PT, and Himali Patel, PTA.

“The OrthoIllinois team was solid with their treatment plan,” explains Norine. “They all worked so well together to help Sabrina in her recovery.”

During physical therapy, Sabrina was using the strongest bands and she broke three of them. She was very determined to get back to her sports. She was ahead of her recovery because she was so dedicated to doing her exercises at home too. 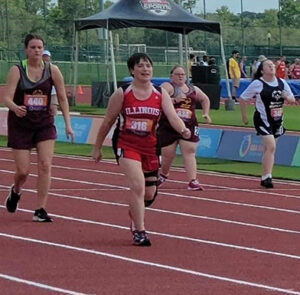 Sabrina worked diligently during physical therapy, just like she does with everything else in life and was able to participate in the Special Olympics USA Games in Orlando this past summer. Instead of running the races she was nominated for, she was able to walk. Her goal was to come

home with a gold medal. Well, she achieved her goal (as she always does) and also received a bronze in another event.

Today, Sabrina is almost one year out from her total ACL reconstruction, and she just recently was released from therapy. She is excited to get back to competing in all the sports she loves. She started playing floor hockey again in September and is the quarterback of her flag football team.

“We are so lucky and fortunate to have access to OrthoIllinois,” Norine shared. “They are a part of our family.”

“Sabrina will be in the Special Olympic World Games someday. She is so dedicated and competitive,” Norine continued.

“And by the way, she can ride a bike too,” said Norine.