In 2011, Larry Jones, purchased a new home and moved into the Del Webb Edgewater neighborhood in Elgin, a community for people 50 and older. Jones, a retired executive from Thermo Fisher Scientific, was excited about the change and was looking forward to becoming part of the community.

Part of his plan was to continue to stay active, something he had put as a priority for most of his life. Jones had dealt with health challenges along the way, including heart problems that led to triple bypass surgery, prostate cancer, not to mention having a kidney removed when he was a teenager—yet these things didn’t stop him from exercising, including times in his life when he regularly ran 20-25 miles a week.

During the home buying process, Larry and his real estate agent had a conversation about healthcare, and the agent mentioned an orthopaedic surgeon who he had been very pleased with—Dr. Tom Stanley.

“I put that information in the back of my brain,” says Larry, age 68. “I had had hip pain for about 10 years—it radiated down into my ankle. I thought I probably would need a hip replacement someday. But most of the time, I ignored the problem and was stubborn about admitting I had a hip issue.”

Pain No Longer Can Be Ignored

In January 2019, Larry was driving home after spending the day with his grandchildren. Soon, the hip pain he was so familiar with began to appear. But this time, it came with a vengeance, and it was impossible to ignore.

“I was nauseated with pain. It was so bad, I drove myself to an orthopaedic emergency facility,” he explains. “They did imaging tests which showed I had a bulging spinal disc. All those years, I was so certain it was a hip issue. But it had nothing to do with my hip—it was my back.”

Larry was given a pain medication and the emergency facility recommended he schedule an appointment with an orthopaedic spine doctor as soon as possible.

The next day, Larry made an appointment to see Dr. Stanley.

“I talked to him about how I knew something was wrong, but I had been pushing things off,” says Larry. “I knew things were bad, but I wanted to see if there was anything we could do beside surgery. I liked how Dr. Stanley listened to me.”

Dr. Stanley agreed they could try some non-surgical treatments to see if things improved.

“The bulge from the disc was pressing on a nerve, and if there was inflammation, there was even more pressure.  So, we tried anti-inflammatories,” explains Dr. Stanley. “Larry also participated in physical therapy which helped build up his core strength.”

The Time Was Right for Surgery

Despite these treatments, the pain became worse, and eventually was so intense that Larry was not even able to sit without pain.

Larry told Dr. Stanley he wanted surgery—as soon as possible. Dr. Stanley explained that he would first need to review Larry’s medications before they could schedule a date. When he did, he noticed Larry was on a blood thinner.

“If a patient is on a blood thinner, the dose must be stopped temporarily before surgery,” explains Dr. Stanley. “The short interruption allows the surgery to be performed with the least amount of risk to the pain, since it prevents excess bleeding, but does not dramatically increase the risk of a patient developing a blood clot.”

In Larry’s case, they would need to wait seven to 10 days before the lumbar discectomy surgery—a procedure to remove a damaged disc in the lower back—could be performed.

Dr. Stanley performs lumbar discectomy as a day surgery, meaning a patient can go home after the procedure and does not need to stay overnight in the hospital. However, in Larry’s case, Dr. Stanley found a cyst during surgery that was contributing to the pain and also needed to be removed. Because of this, Larry stayed overnight for observation.

List Helps Larry Focus on What’s Best for Him

Once home, Larry started physical therapy. Several times each week, he went to ATI Physical Therapy in Elgin where he worked on regaining flexibility and improving his balance. Before the sessions ended, Larry had the good idea to bring in a list of all the exercise equipment in the workout room at his Edgewater community.

“They were able to tell me what to focus on and what equipment to use,” says Larry. “They were also happy to have the list so they could use it with their other patients, since there are so many residents from my community who go to that physical therapy facility.”

“Don’t Try to Be Your Own Doctor”

Today, just a few months post-surgery, Larry is already enjoying an active and rewarding lifestyle. He spent the Easter holiday enjoying activities with his 7-, 6- and 4-year-old grand kids. Next on the agenda is an excursion with his son in California.

“He’s quite the hiker—he recently got back from a trip to Patagonia,” says Larry. “I’m looking forward to doing some hikes with him.”

When it comes to day-to-day life, Larry says simply being able to drive for longer than an hour without pain, and the ability to take daily walks, has improved his life considerably.

When asked if he has any advice for others who might be experiencing some type of chronic pain, Larry says this:

“Don’t try to be your own doctor and diagnose yourself,” he advises. “I thought I had a hip problem, but I was wrong. Go to a doctor and find out what’s wrong and what you can do about it. Although things worked out for me, I wish I would have seen a doctor sooner.” 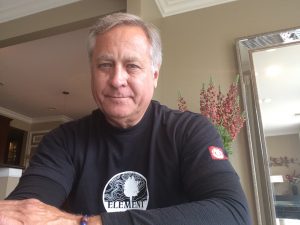