Charlotte Carey, 77, of Elgin, Illinois, says life is good, and that she has several reasons to celebrate and be thankful in 2019.
The first is, she and her husband Bruce will celebrate their 50th wedding anniversary. A gathering is planned in Texas, where they’ll spend time with their children and grandchildren.

Charlotte, a former flight attendant, and Bruce, a former pilot, met on Bruce’s very first flight. They’ve lived in the same home in Elgin for 48 years, and have enjoyed being an active part of their community and church, and are avid Chicago Cubs and Chicago Blackhawks fans.

The second reason to celebrate is Charlotte is now pain-free. But only a few short months earlier—in the Fall of 2018—her back pain was so intense that even walking a short distance caused excruciating pain. Eventually her husband took over the household chores Charlotte used to do, because she simply could not do them any longer.

Pain Just Got Worse and Worse

Charlotte had been diagnosed with osteoarthritis several years before. She had had two knee replacements—one in 2005 and 2012—and after recovering, had felt fine.

Then in early 2018, she began developing back pain. At first it was annoying. Then it became worse. She went to a provider who recommended steroid injections for pain management, and she received several over the course of six months. However, instead of getting better, the pain was getting much worse.

Not knowing what to do next, Charlotte decided to call a family friend who also happened to be on staff of Advocate Sherman Hospital in Elgin. She highly recommended Charlotte see Tom Stanley, M.D., M.P.H., a surgeon specializing in orthopedic spine care.

A Bad Infection and a Severely Damaged Spine

“Dr. Stanley saw me very quickly,” says Charlotte. “We did an MRI which showed a severely degenerative thoracic spine—and I had an infection in my back.”

Dr. Stanley explains that although infections of the spine are not common, they have the potential to become catastrophic.

“This is a case of a spinal infection that was mistaken for arthritic back pain,” he says. “Fortunately, we were able to intervene before the infection led to paralysis.”

After surgery, and while still in the hospital, Charlotte had a welcomed surprise.

“The severe, debilitating pain was gone and I was able to get up and walk around,” says Charlotte.

Next, she spent two weeks in a rehabilitation facility, to help her gain strength and mobility, then went home.

While still in the hospital, a type of small tube/catheter called a PICC line, had been inserted into Charlotte’s upper chest. This was done so she could continue to receive antibiotic infusions for the infection. A nurse came to their home and showed Bruce how to administer the infusion using the device.

Now, just three months after her surgery, Charlotte is visiting Dr. Stanley about once a month for follow up and says she feels great and describes surgery and the entire process a “terrific success.”

When asked if she has advice for others who may have back pain that’s worsening, Charlotte says the best thing to do is to do something.

“If you have pain, make an appointment and get an evaluation,” she says. “The doctor might order tests, so then you can see if there is something that can be done to help you.” 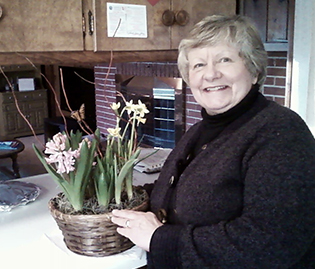