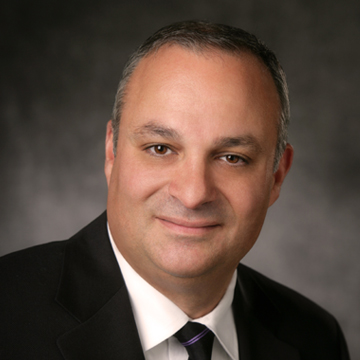 After Hip Resurfacing, Doctor is Feeling ‘Better than Normal’

As an ER physician, Dr. Joseph Yates understands pain. As a budding improvisational comedian/actor, he knows pain is only funny when it’s an act. And while the pain in his hips wasn’t necessarily stopping him from working and enjoying life, it was slowing him down to a point where he knew it was time to do something about it.

“My flexibility had greatly decreased,” said Dr. Yates, “and the pain would keep me up at night, affecting my ability to get a good night’s sleep.” As a member of the medical community, Dr. Yates was familiar with OrthoIllinois and Mark Barba, MD, as a colleague. “When I came to Rockford in 2013 and got to know the physicians at OrthoIllinois, I was quite impressed,” he said. “It’s an amazing facility for a town this size.” Soon Dr. Yates got to know Dr. Barba and OrthoIllinois as a patient.

A large amount of calcium buildup was causing the pain in Dr. Yates’ hips. But instead of a hip replacement, Drs. Yates and Barba agreed that the best option would be to have a Birmingham Hip Resurfacing procedure. In hip resurfacing, the healthy bone is not removed, but is instead trimmed and capped with a smooth metal covering. The damaged bone and cartilage within the socket is removed and replaced with a metal shell, just as in a traditional total hip replacement. “I was all for having the hip resurfacing,” said Dr. Yates. “For one thing, it gave me more range of motion and a Birmingham hip is less likely to dislocate.”

Within three weeks of having the procedure, Dr. Yates was back to work, and after two months, he says he was not only back to normal, but he was better than normal. “I hadn’t played golf for eight years,” said Dr. Yates. “Last summer, I played every day, and sometimes more than once a day. The only thing that’s kept me off the course this year is the rain!”

Dr. Yates likes to say that he’s “gotten his game back” and post-surgery he has been able to be more active and doing the things he loves to do such as spending time with his kids and grandkids and walking around Chicago, without pain. He was also the model patient, healthy and active before the surgery and dedicated to the rehab. “I know that if left to my own devices, I would not have gotten the same results,” Dr. Yates said. “The rehab is as important as the surgery – it does make a difference.”

Now, two years after surgery, Dr. Yates is focused on a different bone – the funny one. In August, he is auditioning for the Second City Conservatory. “I love to perform and do improv,” he said. “Most people get nervous at a show like Second City that they’ll get called on by a performer. I get nervous that they won’t call on me!” Having the hip resurfacing should help Dr. Yates with his audition as well. “When you do improv, you have to be able to move up and down quickly,” he said, “and that would have limited my ability if I didn’t have mobility in my hip. Now I can focus on what I want to do in life.”