What is the IT band?

The Iliotibial band is a thick band of fascia (connective tissue) that runs on the outside of the thigh from the iliac crest of the hip to the knee. It has no boney attachment. It functions to stabilize the outside of the knee during knee flexion and extension.

What is IT band syndrome?

Iliotibial band syndrome (ITBS) is the result of inflammation and irritation of the distal portion of the iliotibial tendon as it rubs against the lateral femoral condyle, or less commonly, the greater tuberosity. This overuse injury occurs with repetitive flexion and extension of the knee. Inflammation and irritation of the iliotibial band (ITB) also may occur because of a lack of flexibility of the ITB, which can result in an increase in tension on the ITB during the stance phase of running. See the image below.

Other causes or factors that are believed to predispose an athlete to ITBS include excessive internal tibial rotation, genu varum, and increased pronation of the foot.

IT band syndrome is a common overuse injury seen in long-distance runners, cyclists, athletes who must repeatedly squat and military recruits. It can also be the result of rowing and weight lifting or overly vigorous physical training. It is the second most common running injury after Patellofemoral pain syndrome which causes pain in the front of the knee.

What causes IT band syndrome?

IT band syndrome is believed to be caused by friction of the band as it moves over the knee bones during repetitive flexion and extension of the knee. IT band syndrome can also affect people who are inactive for too long, as after wearing a cast after knee or leg surgery.

Some runners may be predisposed to IT Band Syndrome based on poor training, poor flexibility and mechanical imbalances. Other potential predisposing factors can include difference in leg length, and other anatomical issues.

What are the symptoms?

Friction leads to inflammation which causes pain and tenderness on the outside of the knee. IT band pain often begins quickly. The patient will feel a sharp pain or burning sensation when running or walking downhill, especially when the heel hits the ground; and especially when running, walking or hiking downhill when tired. The pain may only be noticeable when the patient exercises, or it may start sooner and last long after the activity has stopped. Sometimes IT band pain can develop after knee surgery. Symptoms may come and go until the patient tries to run or walk down stairs or a hill. At some point the pain may become disabling and interfere with walking and climbing up or down stairs. 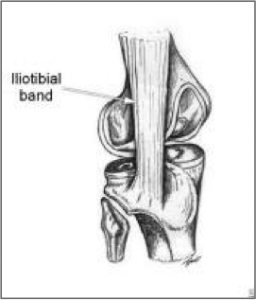 Iliotibial band at the lateral femoral condyle, with the posterior fibers denoted. 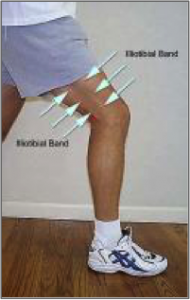 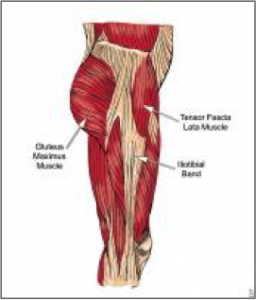 Iliotibial band syndrome has been reported in men and women equally; however, women may be more susceptible to developing the syndrome because of anatomical differences of the thigh and knee, such as genu varum and increased internal tibial rotation. These anatomical differences result in weakness of the quadriceps muscle and an increased varus angle of the femur in relation to the knee.

The patient with iliotibial band syndrome typically reports pain at the lateral aspect of the knee; however, in some cases, the presenting symptom is hip pain over the greater trochanter. The pain usually worsens with physical activity, such as running or cycling. Pain may be exacerbated by running hills and is most intense at heel-strike. Some patients may also report lateral knee pain when walking up or down stairs. The patient also may report an audible, repetitive popping noise in the knee with walking or running.

The physical examination should include the entire lower extremity to rule out other causes of lateral knee or hip pain. In most cases, point tenderness occurs with palpation of the lateral femoral condyle or lateral tibial condyle, especially when flexing or extending the knee, as the iliotibial band (ITB) slides across the lateral femoral condyle. Some patients may have tenderness over the greater trochanteric region of the hip. 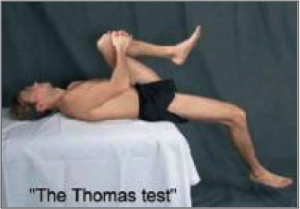 The Thomas test can be used to evaluate restriction in the iliotibial band and hip flexors.

Iliotibial band syndrome (ITBS) typically is due to overuse. The injury is seen most commonly in runners, although other athletes (eg, cyclists, tennis players) also may be affected. The usual mechanism is irritation of the iliotibial tract as it crosses over the lateral femoral condyle and, less commonly, the greater tuberosity. Increased tension or friction of the ITB in this area can result in an increase of irritation or inflammation. Abnormal gait or running biomechanics also have been implicated.

How is it diagnosed?

Your Ortho Illinois knee specialist will review your health history, examine your knee and listen to your symptoms. They may test your knee range of motion, and strength. Characteristics that signal a diagnosis of IT band syndrome include pain on the outside of the knee that worsens when the foot hits the ground; and a physical exam reveals tenderness and swelling on the outside of the knee.

Your specialist will also examine the length of your legs, your muscle strength and tightness in the low back and legs to detect any other potential problems that can cause lateral knee pain.
They may order an MRI to view the soft tissues for inflammation and exclude other causes of lateral knee pain.

How is IT Band syndrome treated?

Because it is an overuse injury, conservative measures will include activity modification, rest, ice compression and elevation; over the counter anti-inflammatory medications, steroid injections, changing activities and physical therapy. The physical therapist or the patient’s trainer, if any, can provide guidance on proper warming up and stretching exercises. When all else fails, It band release surgery may be recommended.

Contact Ortho Illinois to schedule a consultation to get the correct diagnosis and treatment options to help you recover from IT band syndrome.

Treatment for iliotibial band syndrome (ITBS) usually is conservative. Conservative treatment consists of (1) relative rest by decreasing the amount of exercise or training, (2) the use of superficial heat and stretching prior to exercise, and (3) the use of ice after the activity. Heat should be applied before and during stretching for at least 5-10 minutes, and ice treatments should be employed using a cold pack applied to the area for 10-15 minutes or using an ice massage, which involves rubbing ice over the inflamed region for 3-5 minutes or until the area is numb.

Physical therapy is one of the mainstays of treatment for ITBS, in addition to reducing the amount of inflammation and irritation. The physical therapist can advise the athlete about ways to modify his/her training program so that faster results are seen with therapy. Running and cycling should be decreased or avoided to prevent further repetitive stress to the ITB. Wearing proper shoes also is very important in individuals with ITBS. Frequently, patients with ITBS demonstrate excessive pronation of their feet. The physical therapist should evaluate the patient’s biomechanics during walking and running and should assist him/her in obtaining custom-made orthotics to correct faulty mechanics that may be causing the ITBS.

Physical therapy treatment in the acute stage may include modalities such as phonophoresis or iontophoresis in addition to cryotherapy to decrease the inflammation. Since some cases of ITBS are caused by excessive tension on the ITB, physical therapy can help to incorporate proper stretching techniques into the patient’s exercise routine. These exercises concentrate on increasing flexibility of the ITB and of the gluteus muscles. Other muscles that commonly need attention for flexibility include the hamstrings, quadriceps, gastrocnemius, and soleus. See the images below. 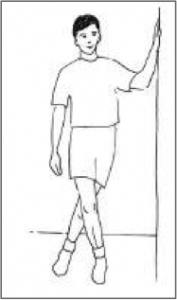 This illustration demonstrates active stretching of the iliotibial band (ITB). The athlete stands a comfortable distance from a wall and, with the contralateral knee extended, leans the proximal shoulder against the wall to stretch the ipsilateral ITB. 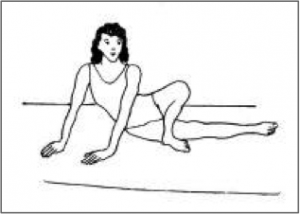 Soft-tissue mobilization and massage techniques may be used to assist with lengthening of the sore ITB. Prior to mobilizing the tissues, the physical therapist may perform an ultrasonographic treatment over the ITB to increase blood flow to the area and prepare the tissues to be stretched. Massage should generally be performed with the ITB in a lengthened state.

As the patient’s symptoms improve, the physical therapy can progress toward strength development and maintenance. The physical therapist should instruct the patient in a home exercise program that continues to improve the strength and endurance of the hip and knee, as well as the back and abdominals. Strengthening of the hip abductors and knee flexors and extensors is an important component of rehabilitation. Once the patient is able to complete all strengthening exercises without discomfort, he/she may gradually return to the previous training regimen.

A study by Noehren et al suggested that in men with ITBS, treatment that addresses hip and knee neuromuscular control may be particularly beneficial. Examining differences between 17 men with ITBS and 17 healthy controls, the investigators found that, although ITB length was somewhat reduced in males with ITBS and hip external rotators were somewhat weaker, the largest differences occurred in internal rotation of the hip and adduction of the knee, both of which were significantly greater in the ITBS subjects.

Occupational therapy usually is not indicated in the treatment of individuals with iliotibial band syndrome.

Reports of surgical intervention exist for recurrent iliotibial band syndrome (ITBS) that has not been responsive to previous conservative treatment. The operation may involve (1) releasing the posterior portion of the ITB, (2) performing an osteotomy of the lateral femoral epicondyle, or (3) performing a bursectomy.

A Belgian study investigated the effectiveness of arthroscopic treatment for ITBS, specifically, resection of the lateral synovial recess, in 33 patients.  The authors reported that all of the patients returned to sports after 3 months. At follow-up (a mean period of 2 years and 4 months), good to excellent results were found in 32 of the patients, and a fair result in 1 of them.