Posted on: December 20th, 2018 by melissawestphal 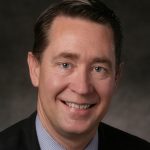 Orthopedic surgery seems like a natural career path today for Dr. Jon Whitehurst, who grew up with a passion for engineering and spent time maneuvering Navy jets.

His foray into medicine is an interesting journey. He enjoyed chemistry and biology as a young student, as his father was an engineer. Originally from Evanston, he graduated from Northwestern University in 1985 with a degree in chemical engineering and a biomedical emphasis.

While he was at Northwestern, he earned scholarships through Air Force and Navy ROTC programs, which gave him the opportunity to spend a summer on a nuclear submarine. He spent 10 weeks underwater, reinforcing the notion that he’d rather be flying an airplane.

After college, he joined the Navy, serving as a naval flight officer from 1985 to 1992. He graduated first in his flight school class, flew an F-14 Tomcat, was selected to attend the Navy Fighter Weapons School (popularly known as TOPGUN) and served during Operation Desert Shield.

“I wanted to devote my life more directly to helping people,” he said, also noting that by the time his Navy career ended, he’d met his wife, Marybeth, and wanted to be more available for family. Marybeth also worked for the Navy as a software engineer designing weapons systems.

Orthopedics was indeed a natural fit. He completed a fellowship in arthroscopic surgery and sports medicine at the Southern California Orthopaedic Institute (SCOI), where he trained with some of the founding fathers of minimally invasive surgical techniques. Being so close to Hollywood and the actors associated with it emphasized the need for smaller incisions and minimal scarring.

After finishing his training, Dr. Whitehurst and his family moved back to Illinois. A connection through SCOI, Dr. Richard Ferkel, lead him to OrthoIllinois, as Ferkel was originally from Rockford.

“I came in for my first interview and could see it was amazing opportunity,” Dr. Whitehurst recalled. “I took the job and bought a house in the same weekend. I fell in love with Rockford and knew it was our best bet.”

He joined the OrthoIllinois team (known then as Rockford Orthopedic Associates) in 2002. His practice started off centered on general orthopedics but transitioned after about six months to focusing primarily on sports medicine.

Today, his practices centers on minimally invasive shoulder and knee surgery. The arthroscopic technique disturbs the soft tissue less, allowing athletes and other patients who qualify for the procedures to get back to every activities quicker and with less pain.

“One of the reasons OrthoIllinois works so well is the physicians specialize in certain procedures and treating certain conditions,” Dr. Whitehurst said. “We also know that if we see any curve balls, we trust each other to refer to one another so patients get the best surgeries and the best outcomes.”

He regularly emphasizes to patients that conservative treatments such as physical therapy are always pursued first before surgery, whenever possible. As for surgery, patients most often ask about incision sizes (with minimally invasive, they are small) and pain during and after procedures.

“I feel like my job is to give patients information about their body and let them choose what they want,” he said. “I give them options and allow them to make the best decision. A lot of the time, the anticipation is worse than the surgery itself. Everyone has their comfort level with regard to how they deal with symptoms on a daily basis. That’s why I want the patient to make their own decision about surgery.”

In addition to seeing patients at OrthoIllinois clinics in Algonquin and Rockford, Dr. Whitehurst also works as part of the medical team for both the Rockford IceHogs and the Chicago Blackhawks. He actively volunteers with local high school and college sports programs, including Boylan Catholic High School.

Away from work, Dr. Whitehurst lives with Marybeth in St. Charles. Their daughter, a musician, recently started college, and their son is a competitive high school swimmer. They enjoy working around the house (Marybeth spends hours in the garden while he’s usually doing home improvement projects) and supporting their kids’ events and activities.